On the sidelines of his test of the Chinese electric SUV Nio ES8, Maxime Fontanier wanted to find out how the battery exchange works in a station opened by the manufacturer in Norway earlier this year.

Already in France in the 1990s

While Better Place launched the battery swap ten years ago with a brilliant flop, the idea had been in the air in France for a long time.

Christian Lucas, former President of Mobil’Eco and engineer for the city of Bordeaux’s fleet, confided to me at the time that he had been working on electric stations to run 20 tonne electric trucks in 2 x 8 hours.

In 5 minutes, the 2 lead packs that had become low in energy, each weighing 2,250 kg, were replaced by previously reloaded units. To demonstrate the full usefulness of this technology, one of these trucks, loaded with its 16-ton logistics, covered 951 km in less than a day. It was September 30, 1997.

With 4 equally passionate colleagues, he adapted this transportable infrastructure to a small fleet of 3 Volta light commercial vehicles. Without sequel.

Some fifteen years later, Renault joined forces with Better Place to establish a network of battery swapping stations in Israel, with plans to expand to other countries. The French manufacturer’s role was mainly to provide a compatible electric car.

The Fluence sedan is part of the ZE family, which also includes the Zoé, the Twizy and some trendy commercial vehicles. Under the name of ” Quikdrop ‘, the system consisted of a robotic arm that retrieved the discharged pack and booted up a full-power battery in its place. The vehicle had to be parked in a specific place on a covered platform. The demonstrator presented in Japan in 2009 took less than 2 minutes to operate.

Broadly speaking, the solution developed by Nio is very similar. However, with one big difference: the brand’s Chinese cars position themselves completely autonomously in the power swap station and also come out of it again. As we can see in the video shot by Maxime Fontanier. 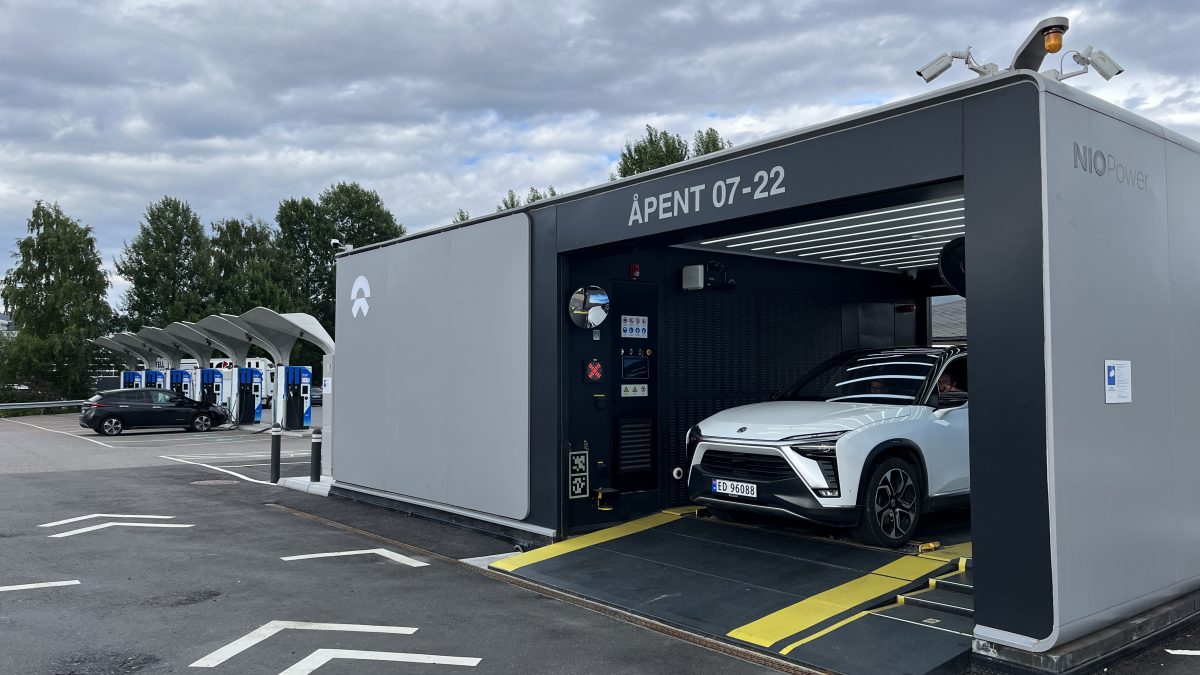 If the failure of the Better Place program then convinced many auto professionals and French electromobilists and elsewhere that replacing batteries is a dead end, it is very different in China. The government is encouraging brands of electric cars and trucks to get involved.

The country’s taxi drivers prefer a system that saves them a lot of time compared to traditional charging. China’s Ministry of Industry and Information Technology (MIIT) is pursuing a pilot project to expand battery replacement across the vast area by 2035.

The challenge is no longer so much to take on the replacement of packs as to harmonize the existing systems. Nio participates in the national plan that envisages the installation of more than 1,000 new dedicated stations. At the end of last year there were already so many, attended by 150,000 vehicles of 200 different models.

In May 2018, Nio in Shenzhen, Nanchang, China, inaugurated its first fully automated battery changing station for the ES8, an electric SUV that Maxime Fontanier was just testing in Oslo. At the beginning of 2021, the manufacturer presented its Power Swap Station 2.0.

It’s a copy of this new generation of infrastructure that we discovered in Norway. It is the first in the country and therefore in Europe. It was officially commissioned last January near Drammen, about forty kilometers from Oslo.

Of the 14 slots, 13 accept batteries that are full or charging, recovered from previous swaps. The fourteenth is used to hold the pack of compatible electric car coming onto the platform. According to the Chinese manufacturer, with 24/7 opening, up to 312 packs could be exchanged per day and operation. That’s a little less than 5 minutes per process.

At the end of June last year, Nio had 1,000 exchange stations in its network, including 250 new ones since the beginning of this 2022. They have recorded more than 10 million cumulative exchanges to date. 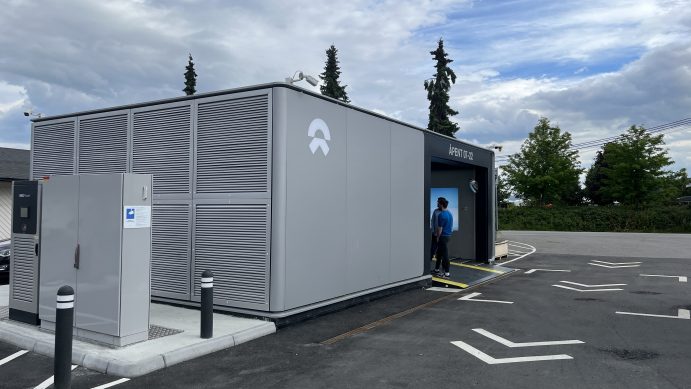 This station visited by our video journalist near Drammen, more precisely in Lier, currently has limited opening hours: 7am to 10pm. In this case it could take up to 195 Nio electric cars per day at the same speed during opening hours.

After the launch phase, which requires the presence of a technician to initiate the loading and control process, the site will be accessible 24/7. ” In one to two months, this station should be completely autonomous confirms Maxime Fontanier. Earlier this year, the manufacturer announced the opening of around twenty of these stations in Norway by the end of the year.

The images collected by the man in the cap show that the body of the ES8 is initially lifted. However, all 4 wheels remain on the ground thanks to the long-travel air suspension. About 2 minutes and 40 seconds after the start of the process, the 100 kWh pack of the ES8 is dropped.

The electric SUV returned to a low position and the two flaps of the swap platform closed. Soon after, the machine is raised again and the hatch opens. A special fastening system guarantees the correct fixation of the interchangeable packs. After 4 minutes and 23 seconds, the vehicle is ready to drive again.

After a Tesla Model X

Interviewed by Maxime Fontanier at Lier train station, the couple owned a Tesla Model X for 5 years before being tempted by their Chinese competitor Nio ES8 in October 2021. I love this car! ‘ dropped the driver. ” Already more than 20,000 km on the clock “, and ” no problem ‘ he reported. Criticism of his new machine compared to his previous American SUV? ” nobody ! “.

With the amount he received for selling his Model X, he was able to buy a new Nio ES8. However, he decided to rent the battery, encouraged by the brand. This offer called ” battery as a service can reduce the bill by around 17.5% or around 20,000 euros for the Norwegian interviewed who opted for the 100 kWh package.

He pays almost 200 euros in rent for this. This amount includes 6 battery changes and 600 kWh charging at the DC Nio quick terminals per month.

Our specialist journalist observed an average range of around 430 km in his test with the 100 kWh battery. The monthly credit of 1,200 kWh (6 changes + 6 top-ups) would result in more than 5,000 km in the combined cycle. That’s more than enough for Tomasz and his wife, who plan to cover a maximum of 40,000 km per year with their ES8.

The Norwegian electric vehicle manufacturer puts the maximum charging capacity of its Chinese SUV at 120 kW. But with a curve that keeps the high values ​​longer than his old Tesla Model X. In the end even with a higher lead for the American SUV, but over a relatively short period of time.” Loading time is similar ‘ he guessed.

And you, dear readers, what do you think of the battery swapping that Nio will be expanding to other European countries in the near future?

We invite you to find our electric car reviews on YouTube. By signing up and agreeing to receive notifications, you will be quickly informed about our new releases.

Airbus adjusts its course and revises its delivery forecasts downwards