Porsche took the first step on the podium of the fastest electric sedans with flying colors on a lap at the Nürburgring. With a Taycan Turbo S equipped with the brand new “performance kit”.

Except for the roll bar and the necessary racing seats, the copy of the record is strictly true to the original (and ultimately the same weight as the production model), fitted with street-legal Pirelli P Zero Corsa tyres, completed the tour through the green hell, i.e. 20.832 km, in 7 minutes, 33 seconds and 3 tenths. 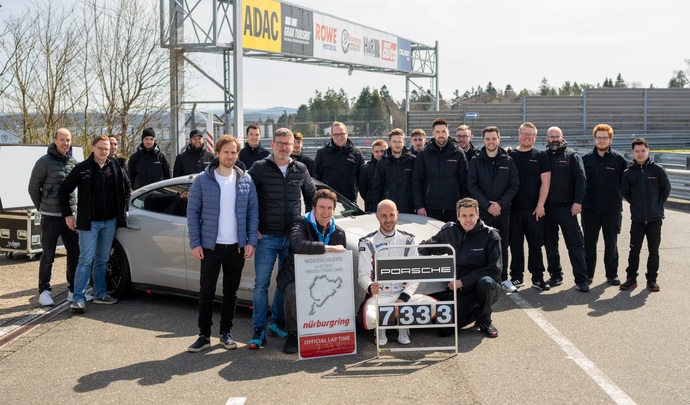 The Taycan thus beats its previous record by almost 10 seconds (7 minutes 42 seconds), and even more when you consider that this time was achieved on the “short” circuit (old track, 20.6 km).

And since Porsche is not used to going back there just to beat its own time, the Taycan came back notably to take the crown from the Tesla Model S Plaid, which clocks in at an incredible 7m35s and 579 thousandths on the new long had track, in September 2021, and which so far took the place of the fastest production electric sedan in the world at this track, which is known for its requirements and the best judges.

The Taycan thus takes the lead for 2.3 small seconds. As said, it owes the extra performance to a kit of the same name, which includes 21-inch “RS Spyder” rims with Pirelli P Zero Corsa tires street legal but for performance on the track, but also a new programming of the PDCC ( dynamic Chassis control) in order to optimally adapt to the new tires.

At the wheel is Porsche development driver Lars Kern, who explains: “that I could push even more with the new performance kit and that the car could be approached with even more precision and agility“.

This kit is currently only available in Germany and costs €13,377.32 including transport to and from the Porsche factory in Zuffenhausen for fitting and reprogramming after delivery. It will be available by the end of the year and can only be fitted to 2023 models manufactured since July 2022.

Had it not been for Sanofi's fall, the Cac 40 would have welcomed the doldrums on the US inflation front